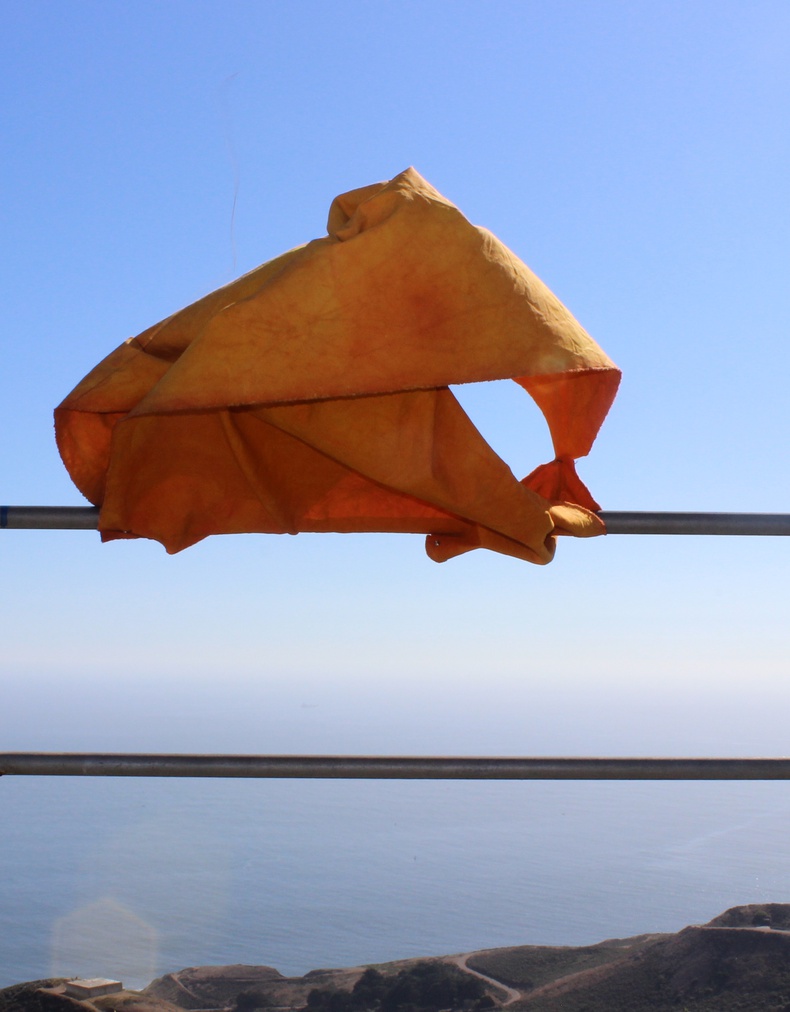 A new body of work by EMMA FITTS as a result of her recent ten-week residency at the Headlands Center for the Arts in San Francisco, USA as the 2019 Fulbright Wallace Arts Trust residency recipient.

Fitts continues her use of an assortment of garment patterns and the lives of creative heroines to inform a colourful new body of work. Presenting two large loose canvas works Fitts imagines a flight jacket for Beatrice Tinsley - the British born New Zealand cosmologist and professor of astronomy whose research made fundamental contributions to the astronomical understanding of how galaxies evolve, grow and die. She imagines a hooded jacket for abstract expressionist artist Lee Krasner whose work had a particular focus on collage, movement and colour.

Fitts has experimented placing her work in the Californian landscape via two event based works; Identification, Friend or Foe" and "Möbius Loop. Using textile and photography she captures her work atop Hill 88 looped over found railings and in various states altered by weather and time. Alongside these major new works, are smaller studies that look to the San Francisco Bay Area Figurative Painting movement as Fitts blurs the lines of painting, collage and textile to create an exciting new style of portraiture.

Emma Fitts has studied at both the University of Canterbury and the Glasgow School of Art. Although based in the United Kingdom from 2009 - 2017 Fitts regularly returned to New Zealand to exhibit her work in both solo and group exhibitions in public, private and artist-run galleries as well as domestic spaces. Exhibitions have included "Softly Spoken" (Hastings Art Gallery, 2019), "Towards Another Figure" (Ashburton Art Gallery, 2019), "In The Rough: Parts 1, 2 & 3" (Te Uru Gallery, 2019), "We Do This" (Christchurch Art Gallery, 2018), "From Pressure to Vibration: The Event of a Thread" (Dowse Art Gallery, 2017), "Embodying the Archive" (The Physics Room, 2016) and with her frequent collaborator Kirstin Carlin - "Necessary Distraction: A Painting Show" (Auckland Art Gallery, 2016) Other recent projects include: "VH-16- 22-7-12-3-22-5" (Victor & Hester, Glasgow, 2015), "Dreams of Machines" (Transmission, Glasgow, 2015), "Fit-out for Olivia Spencer Bower" (Ilam Gallery, Christchurch, 2015) "74 Heaton St, Christchurch" with Kirstin Carlin (2014), "Bomber Jacket for Marilyn Waring" (St Paul St, Auckland, 2014) and "Sports Jacket for Marlow Moss" (Physics Room, Christchurch, 2014). In 2014 Fitts was the Oliver Spencer Bower awardee in Christchurch. In 2018 she was a McCahon House Artist in Residence with a resulting solo exhibition at Te Uru Waitakere Contemporary Gallery. She has recently completed her residency at Headlands Centre for the Arts in San Francisco. Emma Fitts currently lives and works in Christchurch, New Zealand.