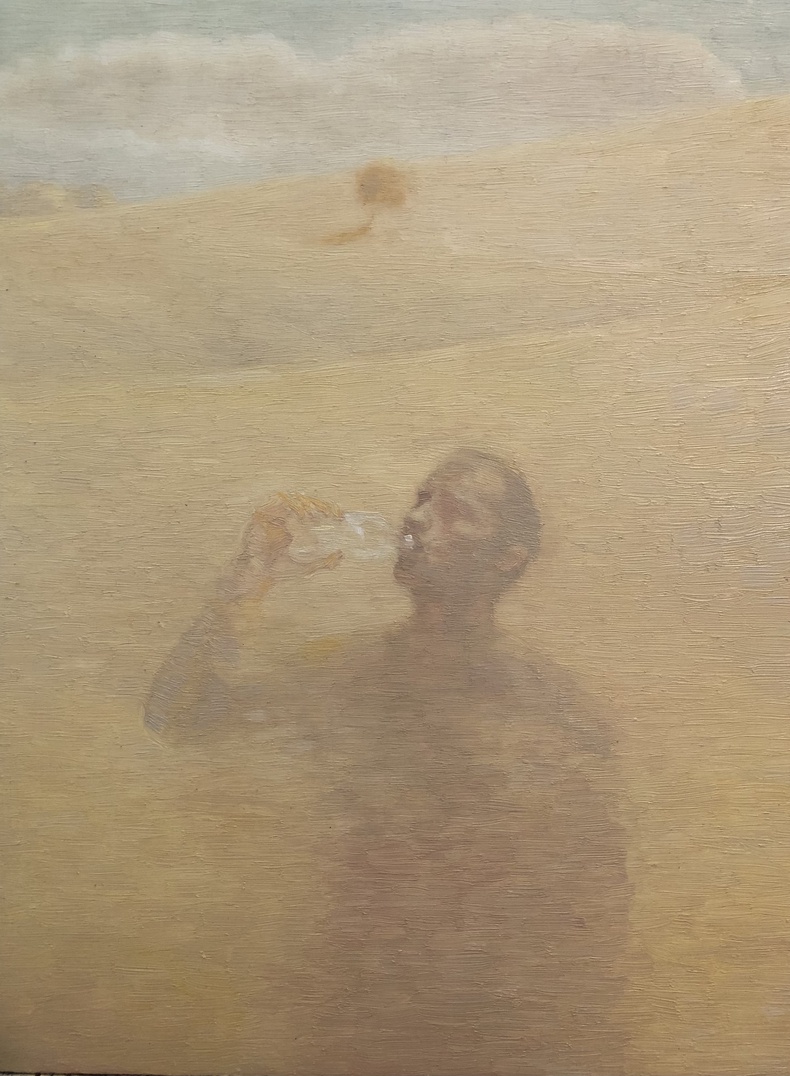 New work by Australian based New Zealand emerging painter Alexi Willemsen.  Her paintings are quiet odes that contain shards of stories. The inhabitants of these works  materialise, shimmering and vulnerable within uncertain landscapes. Fragments of events can be glimpsed through fractured, diaphanous painterly surfaces. These surfaces, gently constructed from layer upon layer of individual brushstrokes create veils or milky filters through which one can glimpse this painter’s fleeting observations. Overall, what is captured again and again is a dreamy ambiguity, an ethereal play between opacity and transparency, solidity and atmosphere, permanence and incertitude.

"The title of this exhibition is borrowed from the first line of Emily Dickenson’s poem of the same name. The central theme embedded within her poem is of finding meaning by trial. As this body of work took shape over the past 18 months each line of the poem emerged as a poignant analogy of the time.

The Black Summer bush fires taught me an essential lesson in phenomenology. An indiscriminate climate magnified through a lens of heavy smoke merged figure and ground, illuminating a heightened sense of fragility and embodiment in my lived experience. The illusionary qualities of the subjective body within the landscape marked by the physical experience of extreme environmental conditions led to new perspectives on figuration within my practice. I became interested in the nature of interconnectedness as something transformative and interchangeable and began working with the idea of the body as landscape, the landscape as portrait, in order to translate our codependent relationship with nature.

Pertinent to this notion of embodiment, the land and seascapes referenced in the work needed to be accessible during the painting process, including those embedded in memory, in order to draw upon direct experience and the embodied recollection of place to inform pictorial strategy.

The Renaissance painting technique Sfumato, an Italian term derived from the word fumo (‘smoke’) and described by Leonardo DaVinci as a method “without lines or borders, in the manner of smoke or beyond the focus plane", serves as material metaphor and weaves through a painterly language in which feathered brushstrokes unify figure and ground, whilst colour and light dictate space and drive the emotional and psychological content within the work.

As narratives began to emerge I turned to Fra Angelico’s Early Renaissance fresco The Annunciation (ca 1440-1445) as a metaphor for communication, and to the hortus conclusus, an enclosed garden often symbolic of purity, depicted within this fresco, as an environment in desperate need of protection.

As the pandemic took hold the hortus conclusus permeated borders, social restrictions, physical and mental health issues, and the enclosed spaces of lockdown. Where subjects move beyond the bush they embody a veil of absorption, and retreat from life as it was previously known. They find themselves at a volatile convergence of uncertainty, compassion, fear, and public and private responsibility, where the personal and political intersect. They occupy spaces in which internal and external existences coalesce.

As I write this brief statement from a managed isolation hotel room, I’m attuned to an awareness of being both an observer and observed being, the fragility of existence and the complexities of an embodied experience in sharp relief, empathetically understood by trial."