For "Rationalization Resistance", Singh’s work -- which includes video with sound, mixed-media installation and social collaboration -- addresses the problematic construct of Rationalization. "Rationalization Resistance" is an examination of ritual, in both constructive and deconstructive states, that alludes to a rich area of human self-expression. A shifting of rationalization towards a ritual space, that primarily relates to human emotions, which support an individual and collective experience through action and contemplation, is repeatedly energized with thought and intention and therefore gains strength. “As the modern world honors the dynamic chief of rationalization, we enter into a bureaucratic organization not limited to capitalist production, in a society infused with a bureaucratic, rationalized system,” states the artist. “Inside of which, actions are systematic and order justified by recourse to legalistic rules, rather than personal or traditional ties. Learned knowledge over remembered knowledge. Institution before intuition,” states the artist. “It is our most meaningful actions that approach a sense of ritual, as audience becomes artist; energy is projected in intention in action. A gesturing takes place with a certain subconscious and purposefulness which renders their actions into a kind of ritual,” says Singh. 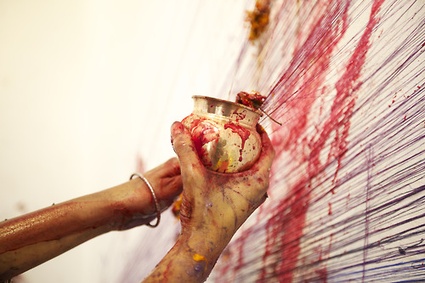