RUTH CLELAND is exhibiting new works from her "grid" series at Window Gallery at Auckland University from 28 October - 22 November 2014.

Recently Cleland has started to include within her works portions of grids, the very ones used to transfer and enlarge her photorealist suburban paintings square by square from photographs. By leaving behind such grids viewers are therefore privy to Cleland’s meticulous practice. Like a magician revealing the secrets of her tricks, Cleland lays her process bare for all the world to see and makes the painting process itself the subject matter of her practice.

These remnants of artifice and construction have become the focus of ‘Grid,’ an exhibition made up of a series of thirteen paintings. Extremely subtle, at first they seem monochromatic, yet upon closer inspection they reveal variations, small shifts in tone and hue. Due to varied treatments of paint surface one starts to see hints of mauve, cream, blue as well as grey. Sometimes flecks of paint or thin wisps of clouds can be seen behind the regularity of the grids.

Painting with acrylic on aluminium, Cleland also thematises the matrices or structures that are grids. Engaging with what art historian Rosalind Krauss called the grid’s ‘will to silence,’ Cleland’s bewilderingly precise hand-painted grids indicate a perpetual organizing, geometricising and flattening of space. There is an emphasis on visuality as well as an ambiguity about what is actually shown, or what can really be seen.

Responding to the specific containment of this exhibition space as well as its transparency, distancing and reflection, Cleland places a configuration of grids behind glass, within the architectural grid that is Window. The result is a gentle probing of ways of framing, containing, presenting and perceiving.

To enquire about works by RUTH CLELAND: info@melanierogergallery.com 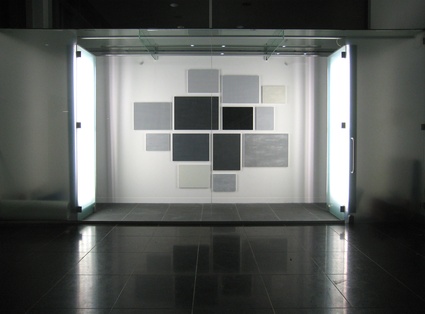 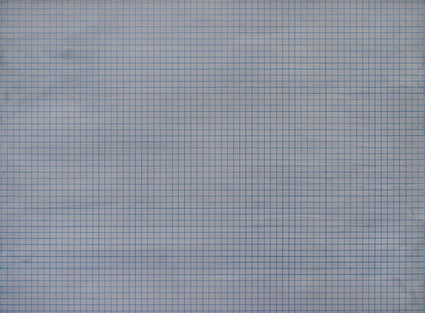