Gallery artists GAVIN HURLEY and RICHARD ORJIS have new and recent work featured in the exhibition "Certainly Very Merry" at Tim Melville Gallery from 2 February - 5 March 2016 as part of Pride 2016.

The exhibition takes its title from the answer given by cult 1970s television chefs Peter Hudson and David Halls to an interviewer’s point-blank question “Are you gay?”  Hudson and Halls’ unique brand of camp, slapstick, booze-soaked humour and questionable cooking beamed into New Zealand’s living rooms at a time when homophobia was rampant and homosexuality was illegal. The 1969 Stonewall Riots were still recent, the passing of the Homosexual Law Reform Bill would not occur until 1986 … and Hudson and Halls were in the closet with the door wide open.

Pride Festivals all over the world – including ours in Auckland - are celebrations of the distance our communities have come in terms of our diversity and creativity as well as our cultural and political power.

To enquire about works by GAVIN HURLEY or RICHARD ORJIS: info@melanierogergallery.com 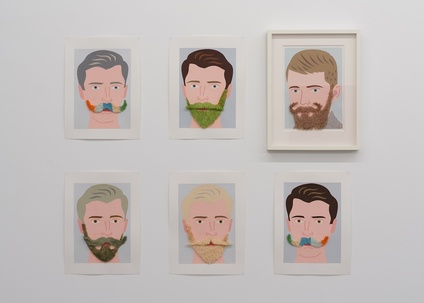