PATRICK POUND will exhibit new work at the Adam Art Gallery in Wellington from 30 July - 18 September.

"I started by collecting things in order to inform my work. What seems to have happened slowly is that the collections eventually became my work."
– Patrick Pound

The New Zealand-born, Melbourne-based artist Patrick Pound has had a long-term engagement with the work of Walker Evans*, both as a writer and as a practicing artist. For his solo exhibition at the Adam Art Gallery, Pound develops an installation comprised of found images, taking his cue from Walker Evans’s practice of working with readymade printed matter which he published in magazines such as Fortune and Architectural Forum.

While Pound’s collecting habits are voracious, he is also a great organiser. He is interested in typologies and arranges items according to shared content: ‘tears’, ‘floral clocks’, ‘crime scenes’, ‘sleepers’, and so on. Laying these out in linear sequences Pound discovers points of intersection to create complex grids of structured yet chaotic imagery. A Hollywood film still of a crime scene will sit eerily alongside an image of a real deceased subject sourced from an archive; or a set of postcards will show the same subject, shot by different photographers and describing both changing viewpoints and the passage of time. Pound states: ‘People make sense of the world through assembling, listing and categorising…meaning is to be found in the accumulation of [these] details.’

To enquire about works by PATRICK POUND: info@melanierogergallery.com

* Walker Evans (1903-1975) remains one of the most important and influential photographers in the history of the medium.  A solo exhibition of his work is shown at the Adam Art Gallery concurrently with this exhibition. 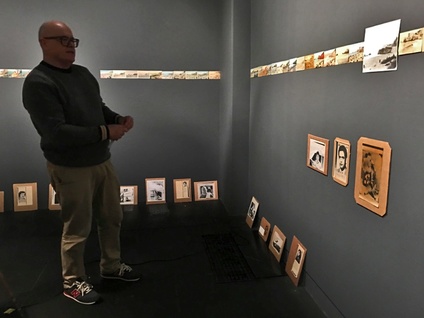