In 2020 Melanie Roger Gallery quietly turned 10. It was the 1st April and we had just gone into our first lockdown. We didn’t announce it or make a song and dance about it because we – my bubble, the gallery and the world – were getting on with the daily grind of surviving a global pandemic. We were locked in our bubbles and fretting about toilet paper, flour and sourdough recipes. Like many other milestones, it went largely unnoticed even to us.  It wasn’t until Linda Tyler raised it with me a while back, that I even remembered. A bit like my birthday that was literally on the day we went into the second lockdown – I am refusing to acknowledge turning a year older if it can’t be celebrated properly. So instead we are raising a glass this week to 12 years...

I took over the gallery from Anna Bibby who had made the decision to retire from the art world and move to France.  It was a process that we managed carefully. It had to work. We didn’t want to scare anyone while they got used to the idea. But I had been in the business a long time so people knew me and most of the artists didn’t spook easily.  A few did leave.  One cited my age as a factor – I was too young apparently.  I am really not I can assure you – even with my fake age. Another said he didn’t like the bus route that ran to the gallery but I think he just didn’t really like me.  Most stayed though and many have become good friends.  A few more joined the gallery – a number whom I had worked with previously in my old space.  That is always good when people want to return to work with you.  Because it is about art, but it’s also about people and community.

Over the years more have joined and a few have left.  Some it has been for the best – some relationships just aren’t the right fit and you realise that after both giving it a go.  A couple have been harder though.  One was devastating. Still makes me sad actually.

We’ve also had ups and downs within our gallery family – because that’s what it is. There have been babies – quite a few in fact – and we have worked with each of the artists to make sure becoming a parent works for them and their practise remains sustainable. We’ve had divorces.  Mine was a biggie.  We’ve had deaths – my father as well as artist friends that we have worked with. We’ve had illnesses and hospital visits. We’ve had celebrations and a lot of laughter.

My daughter has grown up at the gallery.  Twelve years ago she was starting school literally the week I was starting at the gallery.  It was a busy time – especially as a lone parent.  She’s been dragged to art parties (as she calls them) and could often be found out the back in the office playing on the computer and eating chips.  As she got older she would do her homework and eat chips.  Now as a teenager she helps at the openings.  And still eats chips.  Our artist family is her extended family too.

We’ve also had a wonderful audience – collectors and some just visitors.  All welcome.  Many have become friends too. Thank you to all of you for your support, encouragement and kindness over the past twelve years.  And in particular the past two years which have been tougher than most.  We – all of our gallery family – couldn’t do it without you.

Thank you for believing in me.  Happy Birthday to us.

(Imagery by Martin Poppelwell with huge thanks!) 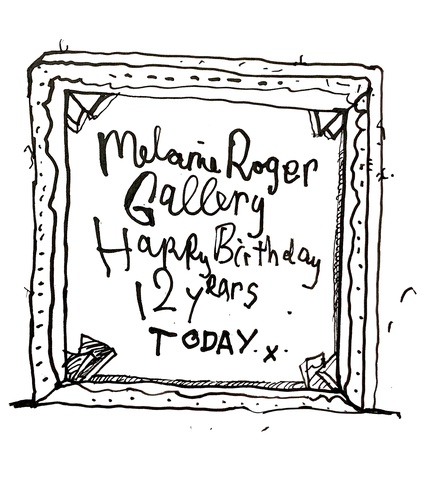