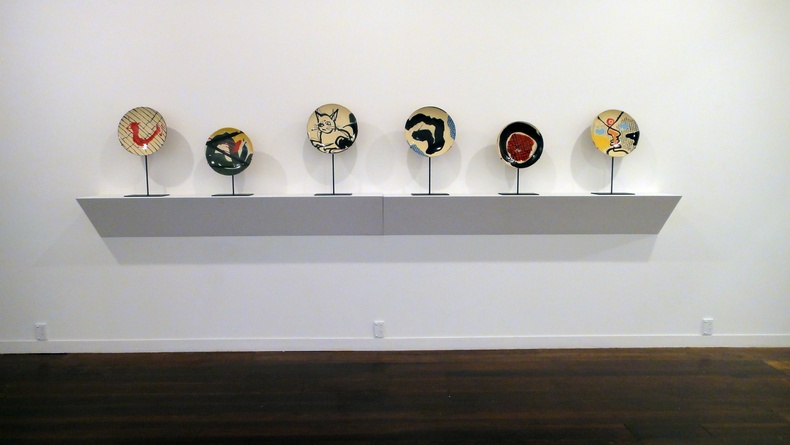 GAVIN HURLEY exhibits new work from his recent "Cook Voyages" series exhibited earlier in 2015 at the National Portrait Gallery in Wellington as part of "Tranquility Disturb'd" curated by Richard Wolfe.   For this series he chose previously overlooked subjects from the voyages - the servant boys who sailed on Cook’s Endeavour. The lack of any known images of these lads was no deterrent; rather, Hurley relished the shortage of historical information and the opportunity to ‘invent’ personalities. In the process he wondered about the personal backgrounds and circumstances of these young seafarers, and their experiences on one of the greatest voyages in history. Despite all that happened and the success of Endeavour, Hurley describes the voyage as seeming ‘like a total fantasy’. One of his subjects, Nicholas Young, is of course familiar to us; as the first member of the crew to sight New Zealand, he gave his name to Young Nick’s Head.

EMILY WOLFE presents new work from her London studio.  She has recently been shortlisted for the prestigious 2015 East London Painting Prize that celebrates the talent and diversity of artists living and working in the boroughs of East London. Emily is one of twenty-three artists shortlisted for the award with work being exhibited at The Rum Factory, Pennington Street Warehouse, London Dock in Wapping from 30 April to 17 May 2015.

Alongside these new paintings, will be recent ceramic works by MARTIN POPPELWELL and guest artist MAX GIMBLETT who have collaborated to create a new conversation built on their experience of ceramics and painting. Both Poppelwell and Gimblett place a high value on the daily practice of drawing and meditation. Over a period of four days in late 2014 the artists did just this at Poppelwell's studios on Bluff Hill, Napier. The results are a range of surprisingly direct and humorous works that elaborate on the discussions the artists had while making the artworks and reflect upon aspects of their current thinking about practice, influences and geographies.