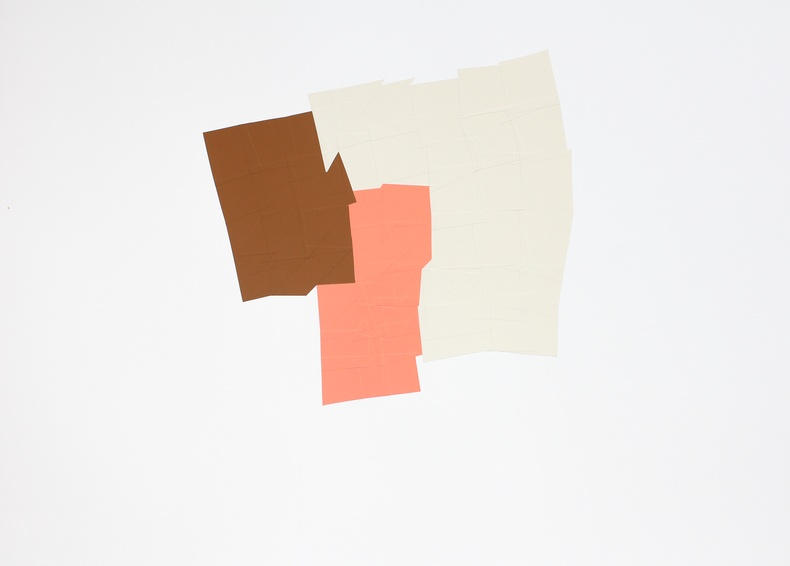 RUTH THOMAS-EDMOND began her vinyl collage works in 2012 as a contunation of her exploration of abstract form and colour relationships.  Related site specific commissioned work has been recently featured at the City Gallery in Wellington as part of the exhibition "How to Fall".  "Ruth Thomas-Edmond’s collages may be read as diagrams of movement and time spent; they are, in one sense, simply what is left after the artist has gone. Cut up units of coloured vinyl are applied directly to the gallery walls, the repetitive gestures building up mass and form incrementally, as a drawing might be made. After extensive testing of materials and possible forms, the works on-site are ultimately made intuitively, practiced movements representing hundreds of small decisions. Only existing for the duration of the exhibition, this is collage as a measure of time, and the time before the exhibition began, in the studio." (Abby Cunnane, City Gallery website, July 2013)

GRAHAM FLETCHER's "Wish Landscape" abstractions (studio image) from 2005 were originally exhibited in Wellington in 2005 then later in 2007 at the Dunedin Public Art Gallery as part of the exhibition "The Secret Life of Paint" curated by Justin Paton and including work by Daniel von Sturmer,  Judy Millar, Julia Morison, Seung Yul Oh, Miranda Parkes, Rohan Wealleans and Simon Ingram.  They are paintings about painting itself - luscious abstracts that burst from the walls as a riot of colour and texture.  "The Wish-Landscapes are lovley, homogenous little works produced by repetitive dipping of prepared canvases into trays of paint, then working over the surfaces to produce pebble-aggregate effects." (Warwick Brown, "Seen this Century", Godwit, 2009)  These early works show Fletcher's interest in sculptural elements that can be seen in his more recent practise creating and incorporating sculptural and ethnographic imagery into his imagined interiors.  This is the first time these works have been exhibited in Auckland.