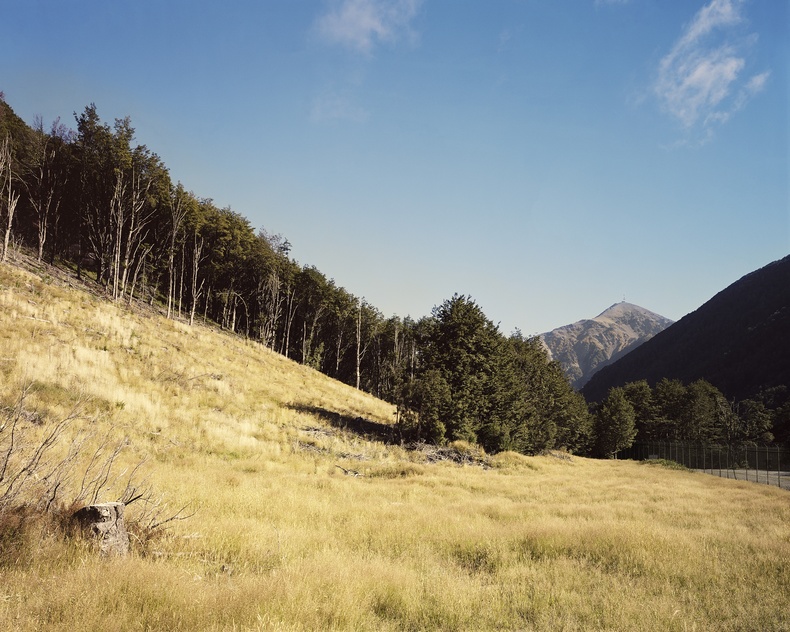 Lets evacuate the world and listen to what remains.

Derek Henderson's recent body of photographic works takes the viewer into very charted territory. These are a type of landscape that appear unnervingly familiar, leaning on 'romantic' tropes of scale, grandeur, contrast and texture. Undeniably the artist is well versed in painterly compositions of the landscapes of mid to late 19th century paintings of the New Zealand "Southern", where the image in many instances was virgin, unseen, hardly trampled, mysterious. Into these inaccessible sites, artists the likes William Hodges, Petrus Van Der Velden and Margaret Stoddart built series of paintings, which looked to articulate these raw, dramatic and primeval encounters. Of notable interest to these artists was the passing of light into and across these often dark landscapes, as mentioned by Francis Pound as describing a 'sublime emotion' but also the idea of light signifying spiritual illumination(2).

Geographically, the central and lower South Island is an area of the country where the shift in scale are most pronounced, long flat vista planes, river channels, bodies of water hurl and collide into brutal ranges, dark chiaroscuro, rock ridges and mountain. This is the place where the photographer placed themselves, these are the components that the lens looms into, drawing imitation into the camera housing.

In the works themselves we are encountering makeshift temporary habitations, as if landed onto the environment, small stations that we read as a campsite, getaway or bolt hole, a decommissioned plant even. It's as if we are witnessing a landscape transitioning from population to abandonment; or conversely an almost imperceptible and temporary resettlement.

The artist is relying on us believing what we are looking at, and in doing so subtly exposes the fiction on show. Each work has a 'chapter' like title, and depending on the sequence that the images are viewed, a variety of narratives begin to occur that direct us to wonder, "what has taken place here?"

The first extant works are in ochre-perhaps to stand out, and be attended to.
They have waited for this for a very long time.(2).

In the work 'The Glacier', an almost monochromatic environment, is apart from 'The Casade', the only piece in this show where there is no opening into the sky. Apart from the river cutting through the valley, this dense textural terrain is not a place to inhabit. It is a place to cross, a place to extract from, a place to leave. The atmosphere in this work has been built slowly and carefully in a meditative frame of mind. This is in large part what the artist is asking us to sense. In my own mind and eye it is the piece 'The Dam' which I keep returning to, namely for the reason of such an abrupt halting force clipped by a shaft of sunlight. There is a dark humor at play here, in part because the dam itself seems inadequte to task, yet still attributed as the key component present.

What perhaps is unclear amidst such beautiful and striking 'pictures' is which parts are actually present, are they really there on the negative or the plate. The most relevant fact is the photographs were captured in a single moment....and the only time to look at is daytime.

Derek Henderson has spoken about working in the South Island, a local knowing where he is, where places are and how to get there, a home. While the landscape is in large part the picture, it is also a backdrop and a setting. The subsequent alterations, smudges and insertions within the frame articulate the artists doubts about trying to interpret an image as part of 'the real'. It is clear that repurposing the environments, he is more confident about their status as an artwork-leading them away from a possible truth into being a beautiful lie.

"A photograph is a secret about a secret". Diane Arbus.

A recent article by Hanya Yanagiara in the New Yorker, she discusses a project by Olivia Laing(2), which unlike Henderson's project is focussed on the loneliness of the city dweller. Yet she suggests that '..loneliness is a realm most deeply inhabited, and fluently expressed, by visual artists.'

It feels to me that in this zone, but away from a sense of city, these works of Henderson's ruminate on both the on the solitary working internal to a photographer, and then externalize or project themselves into the works. The large scale photographs lead a viewer across and through a grand unoccupied precipitous field of space and matter. Somehow like the mind in the midst of a dream-or real flight of fancy.