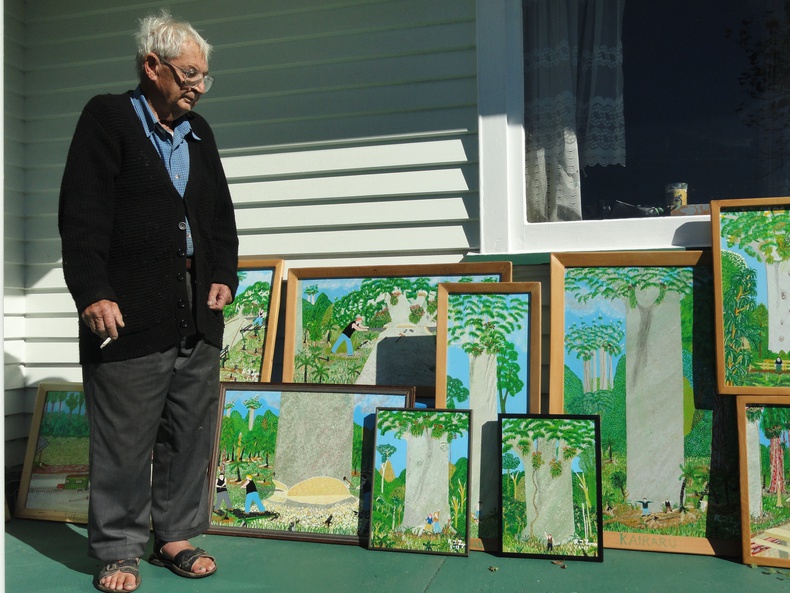 It could be said that Dick (Richard) Lyne (1927 – 2014) did not retire – he simply refocused his energies.  Originally trained as a printer – and deciding that absorbing quantities of lead was not good for his health – Lyne changed direction, opting for life on the land most of the time, although he did spend time as a die hand, fitters mate, storeman and building labourer.

At 65, Lyne picked up a paintbrush for the first time, his work reflecting his knowledge and love of the bush where he spent many years of his working life.  As a bushman, Lyne worked mainly in the King Country and Matakana Island and as such these areas are well represented in his work.
While he has dabbled in several mediums, Lyne preferred working in acrylics, enjoying the vibrancy of the bright colours.  He described his work as ‘plain and simple’ folk art.  His work is far from rough however, with the late John Perry – former Director of the Rotorua Museum -  saying it has a unique quality that proved popular with both local and overseas collectors.  Lyne’s paintings hang in private and public collections in England, France, the USA and Australia as well as New Zealand.
This special one week only exhibition of selected paintings, brings together work for the first time since his passing in 2014. The works illustrate his keen powers of observation where both the timber industry and the rich diversity of the bush are concerned.
Dick always said - “If you’ve seen it and done it, you can paint it.”