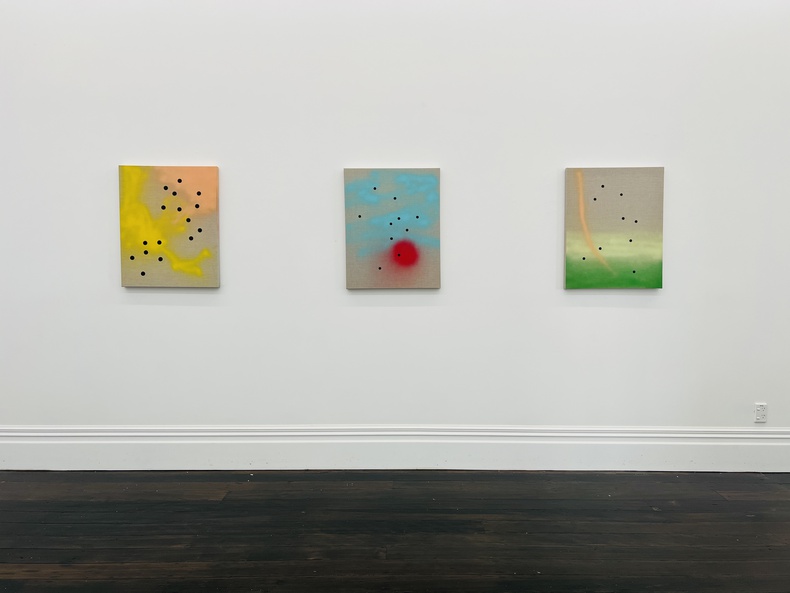 A new solo exhibition by James R Ford exploring ideas around language (visual or written) and perception. Works take the form of dot paintings and text statements, examining Ideas/emotions/questions that exist to some level in us all, whether we realise it or not.

"James R Ford takes a more wry, teasing conceptual approach to our need to search for meaning in abstraction, and our anxiety around locating its value. A series of paintings present constellations of dots on gorgeous galactic sprays of colour, as if they might be joined to make signs. The puzzle is left open – the meaning is left for you to decide – and there is a thoughtful elegance in their construction." (Mark Amery, The Dominion, 2022)

Over the years Ford’s artistic practice has become more minimal, both in aesthetic and narrowing of intention. Simply put, he paint dots, write words, and sometimes creates objects and videos. Underpinning this simplistic output is an interest in what it is to be human: what we live for, how we create meaning, what we value, the paradox of choice, along with emotions whilst trying to figure things out: stress, confusion, happiness.

Ford’s dot paintings have no obvious answer or interpretation. It’s human instinct to search for patterns, recognizable shapes, and formal figures within the abstraction; to impose a rational explanation. Like a prize to be unlocked - if you can figure out the connections you win! To pander to this idea, the newer dot works are titled using passphrases (a recommended password creation method). Do the words in the titles have any relation to the dots and colours in the works? Artworks usually manifest as some visual or conceptual points of reference for the viewer to interpret in a predefined way; we metaphorically ask them to join the dots but they will inevitably join them, or not, in their own way. By searching for, finding or dismissing meaning in this work, the viewer is complicit in its function as an allusion to this complex part of the human condition.

The recent text works are in the form of hand-painted or stencil-sprayed graphic typeface on canvas. Having previously used collage or digital printing for the text, the newer large works consist of hand-painted lettering. This allows the artist to spend more time with the words, to invest in them and what they are saying. The works consider the pursuit of happiness, search for meaning, and the general stress and confusion of it all.

James Ford (b. 1980) is a British born conceptual artist currently based in Wellington. He studied at Nottingham Trent University and then Goldsmiths College in England before relocating to Aotearoa New Zealand in 2009. He has exhibited widely since 2007 in public, private and artist run spaces both in New Zealand, the United Kingdom as well as further afield internationally. As well, he has worked on a number of curatorial and publication projects. Most recently, his work in the Chartwell Collection was included in the exhibition "All That Was Solid Melts" in 2021 at the Auckland Art Gallery and prior in "We're Not Too Big to Care" at the Gus Fisher Gallery, University of Auckland. This is his first exhibition at Melanie Roger Gallery.