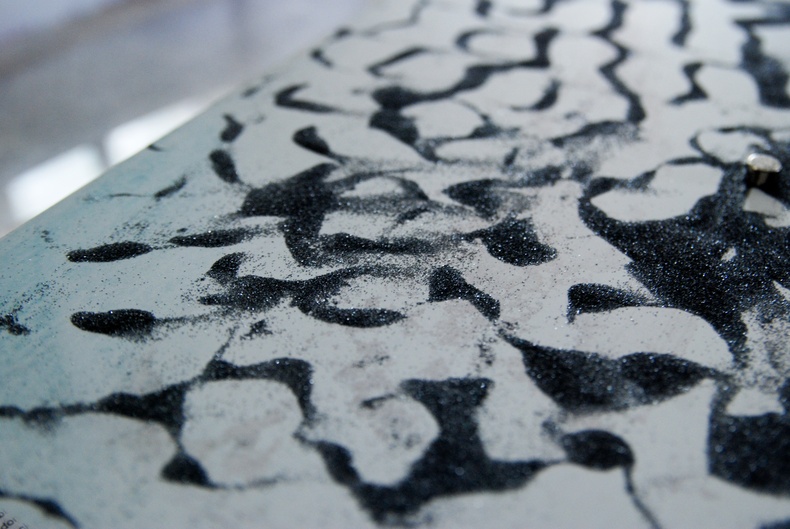 An exhibition of works by TIFFANY SINGH made while 2011 Artist in Residence at the Auckland Print Studio alongside a new sound based artwork.

Based on the eastern concept of the chakra, this collaborative work between Tiffany Singh and the Auckland Print Studio aims to combine the vibrational qualities of sound and colour together in a suite of prints that correspond to the connection between the spiritual, mental, emotional and physical aspects of the human body.

In the hope of creating lithographs that embody the concept; all forms in the universe can be represented by frequencies, with the belief that by combining the frequencies of sound and colour, the mind and body will resonate harmoniously. As all things in nature vibrate, light color and sound frequencies affect everything about us.

To articulate this concept visually the artists used real time sound frequencies to generate different patterns. Then used the corresponding colours to print with, creating works which
embody the harmonics of sound, color & vibration believed by many eastern traditions to be a center for the evolution of consciousness through vibrational sound, color and light healing.

Based on the premise of sound alchemy and loosely drawing on the Ancient Solfeggio frequencies and Taoist healing principles to bring equilibrium, these works have a fluid aesthetic and very much mimic the natural order of vibration in their appearance.

A series of 6 multi-layered lithographic prints were made in two main stages. To start, 12 plates were produced by placing steel-backed, photo-sensitive lithography plates upon a sound "transducer". Using a Macbook Pro and Garage Band, a synthesized flute instrument played individual notes which were converted into vibrations by the transducer, generated specific visual displacement patterns in a coating of silicon carbide granules (100-grit). Each note was stopped and the resultant pattern of opaque grit was exposed onto the plate with 9-minutes exposure to UV light--each grain of carbide becoming a printing mark. These plates were then arranged and printed in layers or "Chords" using analogous colours. Each print has a stacking of 3 to 5 pattern-layers and run through the colours of the spectrum.

The process can be viewed in an online video at the link below.

The new sonic kinetic work has been created using waveforms generated by a Dave Smith Prophet 12 synthesiser that were recorded based on their effect aurally as interesting tones, but also with the greatest mechanical effect promoting excursion of the speaker cone which in turn creates physical high frequency noise from the collisions of the material against the speaker cone and itself. With stable tuning a precise chaotic noise is produced, but rhythmic patterns also become apparent at specific tuned frequencies. Each performance of the synthesiser and subsequent modulation was played in real time while monitoring the behaviour of the speaker and material, recorded into Logic Audio to provide a way of providing dependable playback performance.

A short video showing the sound process used by Tiffany Singh and Auckland Print Studio to make the lithographic works in The Wave of Possibility series.