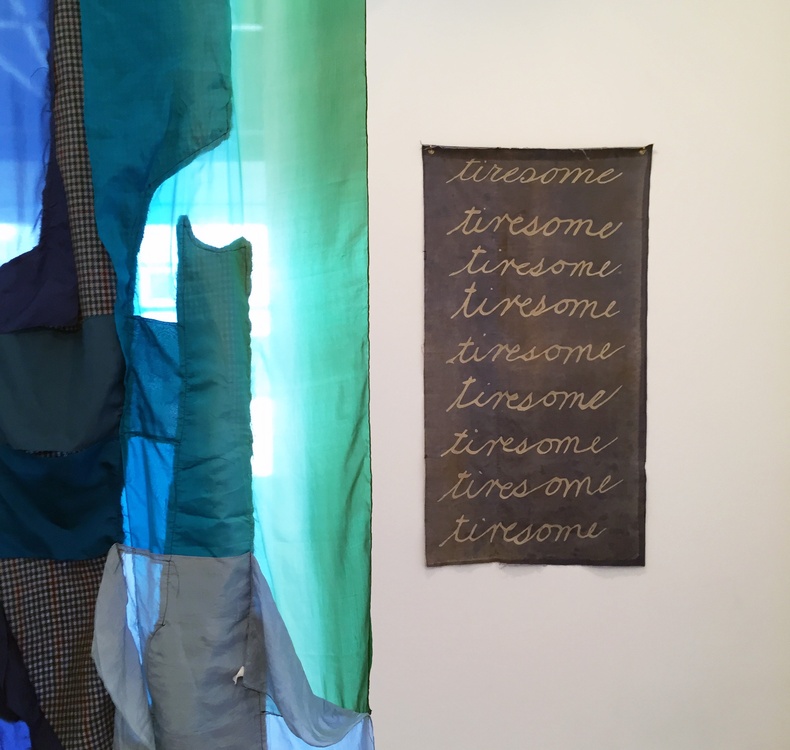 DAN ARPS presents work from his “Unbroken Chain” series previously exhibited at Michael Lett Gallery in 2014. His sublimation prints on satin utilise a process common in textile mass production – the digitally generated heat transfer. Across the series of “Unbroken Chain” works, loops and strings of circular shackles hang on vivid backgrounds of colour. The lurid yet soft hues recall the diffused effect of canned spray paint and the marks and gestures allude to scribbles and graffiti, as well as the ‘anti-social’ tag.

UK based EMMA FITTS works predominantly with textiles as her preferred material as well as exploring them as a subject and a concept to convey ideas surrounding history and feminism. History and people are named and referenced by the clothing Fitts imagines them wearing, drawing on vintage patterning to deconstruct and create new abstracted forms. For “A Stitch in Time”, Fitts presents “Sports Jacket for Marlow Moss”. Marlow Moss (1889 – 1958) is now considered to be one of Britain’s most influential constructivist artists. “I first came across the work of Moss at the Jerwood Gallery in Hastings, England in 2013. There was no catalogue to accompany this exhibition” (Emma Fitts, text to accompany an exhibition at The Physics Room, 2014 where the work has been previously exhibited) So Fitts wrote imaginary questions to Moss about her work and her life – “You will well known for wearing a Sports Jacket. Did you feel that your gender and appearance became a ‘significant topic’ above the actual making of the artwork?” Related recent work was shown earlier in the year at COCA in Christchurch as part of the exhibition “Contemporary Christcurch” curated by a team of influential curators including Lara Strongman and Nathan Pohio curators at the Christchurch Art Gallery, Aaron Kriesler, Director Ilam School of Fine Arts and Jamie Hinton, Physics Room Director.

YOLUNDA HICKMAN’s work arrives to the gallery from a recent joint exhibition with Gabrielle Amodeo at Papakura Art Gallery as part of Art Week 2016. "Empty Orchestra / Rock Garden" juxtaposed the work of the two artists using diverse media to create a new language where the familiar becomes novel and strange. Symbols and fragments of information floated free in a collage of materials from puzzles and cross stitch to painting and animation. It is Hickman’s cross stitched diptychs that are included in “A Stitch in Time” where she alters supplied design information, separating the communicative function from visualisations. By doing this, Hickman aims to disassociate the sources from their original purpose in order to test the possibility of image, composition and form and ascribe new associations. A peacock, a tiger, a leopard, ponies and a garden path – all are turned on their head with unexpected colour combinations that challenge the traditional notions of cross stitch.

GAVIN HURLEY has long worked in collage and in recent years has been adding embroidered beards and moustaches to his rendered characters. Most recently he made 61 moustached postcards – one for each day spent at the Tylee Cottage residency, Whanganui in 2015. Each vintage postcard was sourced locally with Hurley occasionally adding his own notes…”A Man crosses Ridgeway Street…” These were exhibited alongside recent work by Sam Mitchell at the Sarjeant Gallery in September / October 2016. They are available individually.

FIONA JACK presents a selection of recent banner works that are witty, lyrical and thought provoking all at the same time. “One of the banners…repeats the word ‘tiresome’ over and over again in a cursive script. It has been appropriated from a child’s workbook Jack found in Taranaki. A child had been given the task of repeating certain words to develop her hand, and she had, in an apparent act of self-love, made a space for her own feelings in this labour.” (Gwynneth Porter, The Heraldry of Presence exhibition catalogue, Fresh Gallery Otara, 2014). The other work takes its cue from Christchurch based artist Bill Sutton’s journals where in 1922 he wrote - “When I have my breakfast, I cut off a slice of bread for myself and one for the birds. We are all in it together.” Gwynneth Porter describes Jack’s work as “…a practise that involves observation, and indexes something fleeting. There is also the direct repurposing of forms of presentation, and the desire to mediate on change and social cost” (Gweneth Porter, ibid. 2014).

New York based artist VICTORIA MUNRO presents recent work weaving canvas and paint into sculptural forms to create pots and vases – a continuation from her woven paintings exhibited previously at Melanie Roger Gallery. She refers to these as “Container Paintings” – a reference to both their form (although purposeless as functional vessels) as well as their medium – the paint is literally what holds these pieces together.

ANI O’NEILL creates a new work from her home in Rarotonga where she is utilising native hibiscus flowers from her garden as the inspiration and showing the influence of her Pacific Island background. While she draws on traditional Cook Islands female art practices—tivaevae, weaving, plaiting, sewing—these are combined with contemporary western media and references in surprising ways. O'Neill ‘s work bridges and questions the art/craft divide - it is as though these craft items had been dislocated and re-contextualised as abstract paintings, recalling Jasper Johns' target paintings and Julian Dashper's painted drum heads.

RICHARD ORJIS creates a new fabric banner work – an ongoing part of his practise which has included collaborations with clothing designer Kristine Crabb and most recently an exhibition at The Sarjeant Art Gallery. “I’m attracted to the simplified and coded languge of flags and banners. They are often used to warn us of danger, express national pride or poticial positions.” (Richard Orjis, Garden Cirties of Tomorrow, Sarjeant Gallery exhibition publication, 2015)  His new work  "1986: Love, Death and Revolution" calls on the optimism of modernism and the sentiment to intertwine art and life together and acts as a domestic memorial to 20th century gay history. 1986 marks the date of the Homosexual Law Reform Act in New Zealand amidst a global crisis that lead to the AIDS Memorial Quilt NAMES Project starting a year later in a San Francisco store front.

ERICA VAN ZON exhibits a selection of works both in textiles as well as about textiles. Concurrently she is exhibiting in “SOLO” at the Dowse Art Museum in Wellington with a new body of work focused on the life and work of early Wellington gallerist Helen Hitchings. In “A Stitch in Time” she presents a collage based on a scarf worn by Hitchings, a hand hooked rug and - somewhat mysteriously - a stockinged leg.

This is an exhibition that will both delight and challenge and we think a great way to end 2016!