New and recent work by MARTIN POPPELWELL is featured in the exhibition "Unravelled" at City Gallery in Wellington from 30 November 2019 - 13 April 2020.  Curated by Robert Leonard, this exhibition ioncluides work by Peter Robinson, Kirsty Lilico, Isabella Loudon, Martin Poppelwell and Keriie Poliness and is one of a number of exciting new exhibitions for the Summer season.

In 1968, American sculptor Robert Morris coined the term ‘anti-form’ to distinguish a new kind of sculpture that had emerged in reaction to minimalism. Where it stressed composition and organisation, the new art preferred decomposition and disorganisation. In place of strict geometries, Morris, Eva Hesse, Richard Serra, Lynda Bengalis, and Barry Le Va draped, poured, and scattered material. Their work emphasised material, mutability, process. Unravelled brings together five artists who connect with this tradition, embracing disorder and irregularity.

The regular grid is a modernist staple. However, Melbourne’s Kerrie Poliness and Napier's Martin Poppelwell make grids irregular. For her wall drawings, Poliness estimates key points by eye, so her grids expand and contract.

Wellington artist Kirsty Lillico became known for cutting shapes—derived from the floorplans of modernist buildings—from bits of old carpet, hanging and draping them in ways that countered modernist rectitude. She has discarded the floorplans, but continues to improvise works from pieces of old carpet, joining them with big folksy stitches, allowing the shapes to fold and flop sculpturally.

Also from Wellington, Isabella Loudon soaks twine in cement and hangs it out to cure, so the curves—informed by gravity—set. Her work explores the graphic and sculptural possibilities of this procedure. Shapes are inverted and combined. Her works lean against the wall, hang from hooks like rotting cadavers, or form miraculous upstanding architectures.

Auckland artist Peter Robinson presents small metal works: a mound of metal shavings is haunted by its likely prior state as a rectangular block and bent wires clump like a fur ball graphic. Robinson sensitises us to varieties of irregularity. 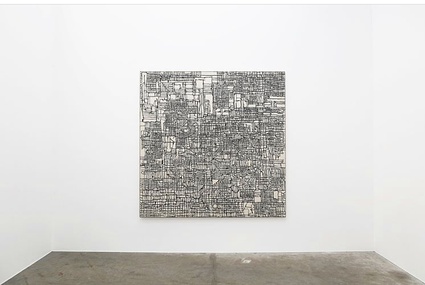