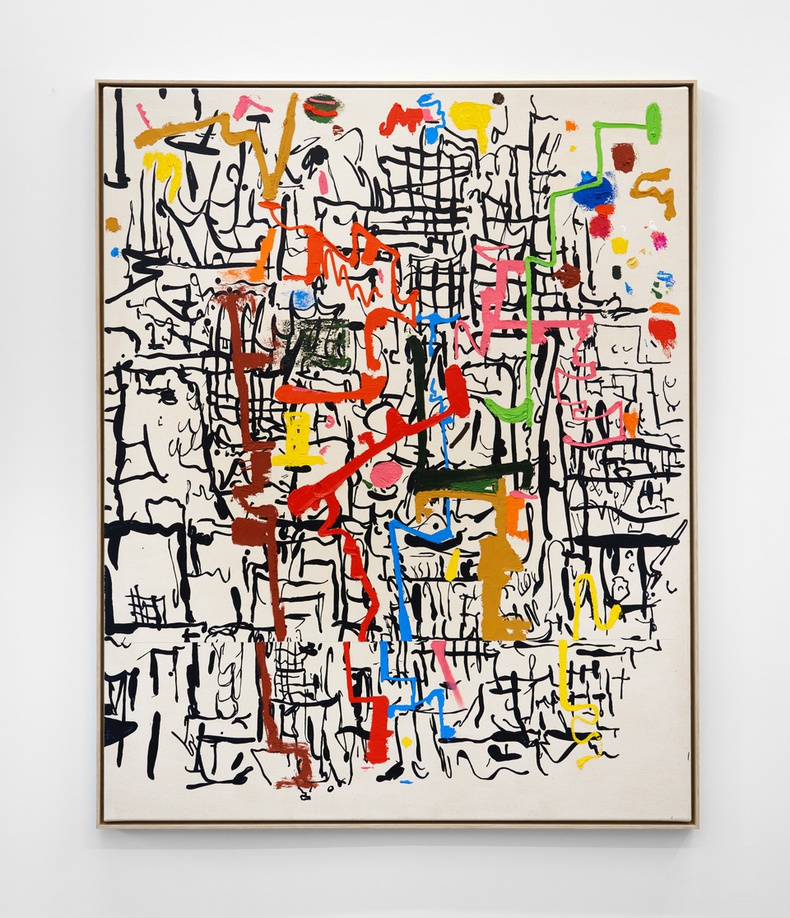 WE ARE UNABLE TO RUN AN OPENING OR TO OPEN THE GALLERY IN LEVEL 3. THE EXHIBITION WILL BE INSTALLED AND BE ONLINE DURING THIS TIME.

WE WILL UPDATE HERE OPENING HOURS AND ANY LATER EVENT THAT MAY HAPPEN ONCE WE ARE ABLE TO IN  LEVEL 2.

THANK YOU FOR YOUR PATIENCE AND SUPPORT OF THE GALLERY AND OUR ARTISTS.

Extending my last show 'meaninglessness', the static or halted form broken down into works that delved into thinking about early 20th century modernism 'mechanique', stop motion photography (3), hetronymic poetry from Portugal (4), and post war 'tragi-comic' novels (Beckett). New pieces constructed over the past year take the diagram of painting into split and schismatic territory. Language and objects re-load words into scripted scenes. In the work form splutters, blunder organically, partially stuck physically wiped out, splatted and pressed, drawn....plopped horizontal, up down.

My ongoing interest (and use of) Samuel Beckett's first three novellas, is the diagram that I use as a model or structure (5). Shifting from a written form on the page into louche drawing, the text is allowed to dissolve and reform into an unravelling & unlikely calligraph 'set' (6). I felt that I had really overlooked this work that lined up in a surprisingly synonymous way, particularly in ones drawing. To be quite straight forward it allowed the figure in the terrain to become a primary subject - to all intensive purpose, painted diagrams with lines. And furthermore, as the musician Nathan Haines noted on seeing some attempts in the studio early 2021, “did a John Coltraine", and re positioned the cycle of notes and passages on the 'score' (7). The 'grid' which I have been using as a marker or peg of form, could be unravelled. (8)

There is a schizm in the conscious flow of everyday that sticks, is stuck to and is allowed to land on the surface (9). In a way it felt like these things may have been here before, yet off stage and out of view. Now it feels like they have been here the whole time (10). Give that painting a carrot, now or soon, later, maybe..(11).

A new zine / collage pubication has been made to coincide with the exhibition.
32 pages, A4, soft cover
Includes an extensive artist essay and new writing by Ralph Paine.
Each with a unique hand painted cover.
Limited edition while stocks last.
$35 each. Please see our publications section and email to enquire.

1. The Unnameable, Samuel Beckett, 1953. Random House 1997.
2. See Francis Picabia, Marcel Duchamp, Sonia Delauney, Lyubov Popova etc..
3. Muybridge’s turn of century stop motion photography was/is an ongoing visual reference for artists and designers, as a kind of go to for figures in motion.
4. Poems of Fernando Pessoa, City Lights, 1998.
5. Molloy, Malone Dies, The Unnameable, published in 1951, 1951 & 1953 respectively.
6."Set" as in the theatre stage, a zone understood to encapsulate the action of the character.
7. Haines talking about work, studio visit, early 2021, where he also stated that he liked a piece of cardboard i had been using to clean my brush.
8. Wellington City Art Gallery, Unravelled, Group Show, 2019-2020, curated by Robert Leonard, which had a grid painting of mine based on a Greek erotic vase painting of a woman stroking a mans penis, titled 'Ancient Artifact'
9. Virginia Woolf argued that writers should strip away the extraneous stuff that the novel had accumulated around itself, she argued, they 'should' record the atoms as they fall upon the mind in the order in which they fall upon the mind and trace the pattern however disconnected and incoherent in appearance which each sight or indecent scores upon the consciousness.
10. Finding a form is building these feelings ( in this case, dissatisfaction, embarrassment, and doubt into a substance. This is a very fragile thing to do. (Amy Sillman, Shit Happens, Notes on Awkwardness, Faux Pas, After 8 Books, 2021.
11. Artist's diary notes, August 2021