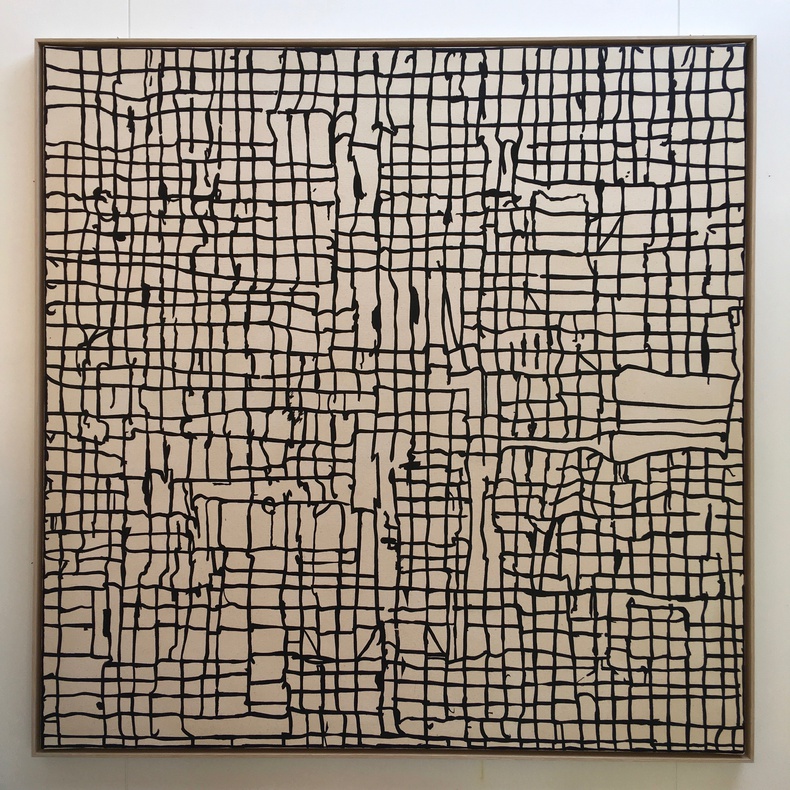 Over the past 20 years i have gradually unpacked the information in my paintings to reveal / show the essential structure underlying all my work. It has long been the case that I have used the grid to articulate the 'pottery' pieces. It became clear from the outset that when confronted with a 3 dimensional form, wrapping it with a grid would clearly articulate how it sits in space. painting pottery has always been a little problematic, as it can so easily fall into the category of craft, and my work is not made with craft in mind. Oddly enough I had to steal the ability to make shapes in order to understand how not to make craft. So the grid was particularly useful, either as a cliche, or a ready made diagram, a plan and an elevation at the same time. By adding it to a form it becomes a cartesian moment, a clunky and asymmetrical xyz presence.

So alongside this way of working and making stuff i have long attempted to apply this way of thinking to the act of painting, and this of course has posed certain problems as the grid in painting is omnipresent as a zone in painting to grapple with. It has occupied some degree of politicization being integral to minimalism and field painting of the late 60's and 70's, but oddly enough its most ardent practitioners, say Agnes Martin, Robert Ryman and perhaps Sol Lewitt to mention some americans, developed a poetical sensuality which ran through and alongside their actual works. ( I should also mention artists like Anni Albers, and more recently Mary Hielmann whose work has also swerved in and around the idea of a grid in painting and artmaking-Albers was a weaver and built large wall works.) There are also a decent handful of European artists...but probably the most important would be Piet Mondriam and George Vantongerloo, that is to me.

But my reality becomes a little different as the work I make hovers in the space between figuration and the formal. A grid on a jug or a cylinder or even a tile is essentially a still life, and I have a need for that to exist as part of the reality of making a painting. So you could say I have been stuck. One has known that there is a solution to making this type of painting, of putting the grid onto a flat space, and controlling somehow the 'damn flatness'.

"All the greatest symbols are empty" or so says Peter Schjeldahl, one of the art critics at The New Yorker.. and I guess I mention him as the emphasis he places on the art experience is a heady mix of sensuality and mind, though I think here he is referring to the light on the water, the river, the whiteness of a whale, the spread of time. the art experience is able to activate at certain levels this reality..and for me by removing colour and just leaving on my 'underpants' so to speak, being primarily linear - I am intent on opening this type of feeling to the viewer. Working with basically line, rythm, texture,scale and movement the black and white paintings are able to slowly become a type of conscience, a humming of thoughts, a soft shimmering of light, structures that repeatably connect and disconnect-letters on a page, and as janet frame would write- "the edge of the alphabet". These works are not meaningful, they touch and caress meaning.

Susan Sontag writes that "a work of art is never simply a vehicle of ideas or of moral sentiments. It is, first of all, an object modifying our consciousness and sensibility, changing the composition, however slightly the humus that nourishes all specific ideas and sentiments." (Against Interpretation, One Culture and the New Sensibility. 1961. Penguin.)

The 2 works "Aquifer" and "LLUG" are born out observations and meditation of my immeadiate environment, and one's daily ritual of heading to the coast at the bottom of my road to swim. I became interested in the seagulls that would perch on the surf club roof at the end of the pool, and made some pretty rudimentry sketches. I thought about how the NZ seagull has a bifurcation valve that enables it to drink salt water and from it filter it to straight water. This transformation led me to break the drawing of the bird into lines and space across a square to construct a grid, the title of the work clearly gull in reverse, and kind of like the sound one may make when swallowing. The work "Aquifer" has a finer grid as it is more about the three rivers that meet the sea just along the coast line, the pourous subterranean zone where the water travels underground and into the sea. so a reversal of what the seagull does with water being transformed to salt water. It is around this thinking these works came into existence as objects. Oddly enough, definitely not still life.